How to Make Frozen Dog Treats – Yogurt and Cheerios

It’s easy to make frozen dog treats with yogurt and Cheerios – and they’re also low fat and healthy. Here’s how I keep my dogs cool on hot summer days – and how I distract them from the fact that I’m leaving for a few hours! Georgie and Tiffy are used to me being around all the time, writing for The Dog Blog (and my other blogs)…so when I leave without them, it’s a Major Event. 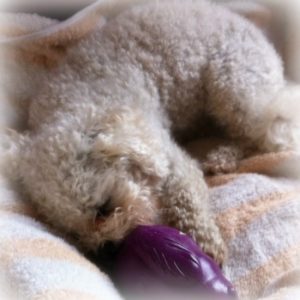 Tiffy, chowing down on her frozen dog treats

Georgie and Tiffy each have two different Kong Dog Toys: one big Kong for breakfast (I stuff kibble in their Kongs, to make them work for breakfast), and one small Kong for the homemade Cheerio-and-yogurt frozen dog treats.

The “frozen yogurt” I give my dogs as a treat isn’t the frozen yogurt you buy in the freezer section of the grocery store – or that you make at home in an ice cream maker. It’s actual yogurt, which I put in a Kong and freeze. Here’s how I make homemade frozen dog treats for Georgie and Tiffy…

How to Make Frozen Dog Treats

The only time consuming part of this recipe for frozen dog treats is the time it takes to freeze the Kongs (at least 15 minutes). I like to make these frozen dog treats the evening before I need them, so I can grab them and go the next day.

Mix Cheerios with plain yogurt in a bowl. I mix Cheerios and yogurt, then add a couple teaspoons of water. This makes the Cheerio mixture soft and gooey and mushy, and thus easy to stuff into the Kongs. Cheerios, by the way, are one of my favorite dog treats because they’re low fat, high fibre, and easy to carry in my pocket. And, I’ve learned that Cheerios are an awesome addition to homemade frozen dog treats because they freeze inside the Kong really well. Georgie and Tiffy have agreed that Cheerios are NOT their favorite dog treat, but they’re not having much luck convincing me to give them bits of raw steak or squirrel instead.

Let the Cheerios and yogurt mixture turn to mush. It only takes about 10 minutes to make mush to stuff. Mush is easier to stuff into Kongs than hard Cheerios or dog biscuits. Before I discovered yogurt and Cheerios as the best stuffing for frozen dog treats, I used Marrobone Snack Treats for Dogs. I’d soak them in water and let them turn to mush for stuffing, but the smell was revolting. I don’t even want to know what’s in those Marrow Bones – but they’re one of Georgie and Tiffy’s favorite dog treats. They’ll take one of those Marrowbone dog treats over a Cheerio any day of the week. Gross. 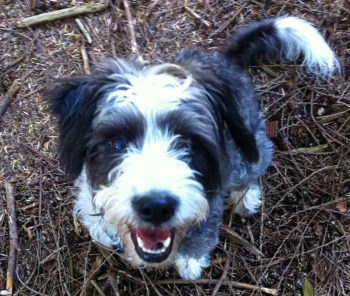 Include other flavors in your frozen dog treats. I’ll often mix a bit of shredded cheese, peanut butter, or even Cheez Whiz (which is not a healthy dog treat, I know) into the Cheerio-and-yogurt mush. The beauty of yogurt and Cheerios is that they’re fairly bland – especially with water mixed in – so the flavors won’t “compete.” The beauty of making frozen dog treats is that dogs will eat anything. (That’s not true, and I know it!).

Make frozen dog treats easier and faster with premade mush. If you don’t have the time, inclination, or energy to make your own homemade Cheerio-and-yogurt mush for these frozen dog treats, get a squeeze tube of  Real Peanut Butter Dog Treat Mix for Kongs.

Insert something yummy into the opening. Sometimes I’ll stick a bonus treat into the mushy opening of the Kong – especially if I haven’t made enough Cheerio and yogurt mush for the frozen dog treats. I’ve added a Pizzle for Georgie and a Toothbrush for Tiffy. Just stick it about halfway into the Kong, so it’s like a popsicle. A  dog-sicle!

Another frozen dog treat option for time-crunched owners is the  Freezy Pups Kit – Frozen Dog Treats. It’s premade, and won’t take nearly as much time as learning to how to make your own frozen dog treats. You just stick the premade treat mix into the contraption, freeze, and voila! Frozen dog treats.

If you buy premade frozen dog treats, look at the ingredients. Georgie has stomach problems – I describe how I dealt with her tummy troubles in  What Causes Gurgling Stomach Noises in Dogs? – which is why I give her the bland Cheerios and yogurt. If your dog has health issues, make sure you look at the ingredients of premade frozen dog treats — as well as the container, rubber, or plastic they come in.

That’s how to make frozen dog treats for dogs on hot summer days. What have I missed? Woof woof below…

Should You Adopt a Second Dog?