Coping With Guilt When Your Dog Kills Squirrels

If you’ve never said, “My dog killed a squirrel”, I envy you! If your dog kills squirrels, you might find these tips on coping with guilt and sadness helpful. 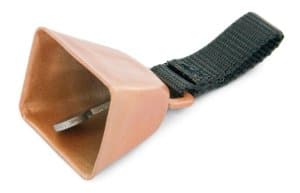 Dog Bell to Warn Squirrels That a Killer is Approaching

My dog Georgie has ended the lives of three squirrels. She wears dog and rabies tags on her collar around her neck that jingle when she moves, but they obviously don’t jingle loud enough to warn squirrels that she’s coming. My shouts don’t warn the squirrels either, so my next step may be to get a bigger, louder bell so the critters hear her coming.

The SportDOG Copper-Plated Sports Bell is an option…does your “squirrel killer” wear a bell?

Georgie is a terrier mix breed with ratter in her blood; there is nothing she loves more than to hunt squirrels. I adopted her from the SPCA in Vancouver three years ago, and I unknowingly trained her to kill squirrels. Well, I didn’t train my dog to kill squirrels…I just accidentally nurtured her squirrel killer instinct.

How I Accidentally Trained My Dog to Kill Squirrels

At first “squirrel hunting” was fun – we’d romp around the forests in North Vancouver, sometimes chasing squirrels, mostly just roaming the trails and examining the foliage, scat, various bits of this and that. When I spotted a squirrel, I’d point it out to Georgie. She’d run after it, the squirrel would scamper up a tree, and I’d praise Georgie for “treeing” the squirrel.

Then we spotted a squirrel in a clearing, and my dog actually caught up to it. Georgie is a very fast dog. At the dog park, she leaves 99% of the dogs in dust when she runs. The first two times Georgie caught squirrels, they squirmed away. My dog didn’t know what to do, and certainly didn’t know to kill squirrels. I didn’t think to praise or scold her – but in hindsight, I now wish I would’ve praised her for letting the squirrels go.

Since then, my dog has killed three squirrels and I feel terrible.

The third time Georgie caught a squirrel, she shook it like a rag doll and snapped its neck. It was horrible. The squirrel was chirping like crazy at first, and suddenly went silent. I had to walk away – further down the trail in the forest – because I didn’t know what to do. Georgie caught up to me very quickly. I thought she’d stay to rip the poor squirrel apart, but she left it almost immediately.

After my dog killed her first squirrel, she seemed despondent. Walking home, I’m sure we were in shock. It was my dog’s first squirrel kill – and the first time I witnessed my beloved dog take an animal’s life. I feel really guilty and sad…but even so, I refuse to keep Georgie on leash in the forest.

We adopted a second dog, Tiffy, about a year ago. Tiffy was there when Georgie killed her second two squirrels, and Tiffy absolutely loves it. Georgie snaps the squirrel’s neck and drops it; Tiffy picks the squirrel up by the scruff of its neck and drags it over to me. Tiffy is a 7 pound Bichon Frise, and the squirrels she’s brought to me – even when I’m way down the trail because I can’t stand to watch my dogs kill squirrels – are half her size.

Tips for Coping With Guilt When Your Dog Kills Squirrels

Accept dogs for who and what they are. “Even the tiniest Poodle or Chihuahua is still a wolf at heart.” – Dorothy Hinshaw. Some terriers were bred as “ratters” – they hunt and kill rats to stop diseases like the plague from spreading. My dog Georgie clearly has ratter in her blood. She’s doing what she was bred to do. I made the mistake of encouraging her to hunt and kill squirrels by pointing them out to her when we saw them in the forest. I had no idea my dog could actually catch a squirrel. I’m not surprised that she kills squirrels, but I’m shocked that she’s actually caught five squirrels in total.

To learn more about what your dog says about your personality, read What Your Favorite Dog Breed Says About You.

Do something good for animals. Every month, I give 10% of my earnings to a non-profit organization or charity. This month, I’ll donate to the SPCA or a dog shelter in Vancouver. I know this doesn’t mean anything to the squirrels my dog killed, but at least other animals might be helped or saved. If you have any suggestions for dog shelters in Vancouver I can donate to, please share below.

Let Mother Nature do her thing. Our Creator made all of us, including the squirrels and the dogs who kill them. When I went on safari in Africa (I lived there for three years), I saw the remains of a kill. Lions kill antelope, crocodiles kill zebra, eagles kill fish. Here in Vancouver, coyotes kill cats, owls kill small dogs, cougars kill pets. It really is a jungle out there. I hate that my dogs are part of the jungle mentality, but I also know they’re animals.

Think about keeping your dog on leash. I won’t take away my dogs’ “off the leash” privileges in the forest, even though I pray during every walk that they won’t kill another squirrel. My dogs need to be free to be dogs, even though they’re squirrel killers. I need my dogs to be free, even though I feel so guilty and sad that they kill squirrels. I have to let them go. I just hope that the squirrels my dogs killed were “recycled” by nature. That is, I hope – and pray – that an owl, coyote, skunk, or bird was able to have dinner because of my dogs’ instincts.

Did your dog kill a squirrel? What do you think – should I keep my dogs on leash from now on? I welcome your thoughts below.

1 comments On Coping With Guilt When Your Dog Kills Squirrels