10 Classic Board Games for Adults

This list of classic board games for adults includes a brief history of each game and what makes the board games classic. These “gifts for gamers” also includes links, so you can get more information about the board games on this list. 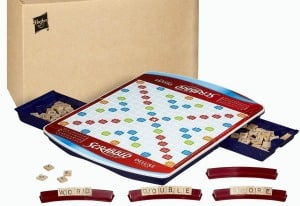 Scrabble – A Classic Board Game for Adults

Scrabble Deluxe Game is first on most lists of classic board games for adults. In 1938, American architect Alfred Mosher Butts created Scrabble as a variation on an earlier word game he invented called Lexiko. This classic board game was originally called “Criss-Crosswords” but the inventor was not successful in selling the game to any major game manufacturers of the day.

In 1948, James Brunot bought the rights to manufacture Criss-Crosswords in exchange for granting the inventor a royalty on every unit sold. Brunot slightly rearranged the board and simplified the rules; he also changed the name of the game to “Scrabble” (which means “to scratch frantically”). Brunot and his family made 2,400 sets of this classic board game for adults and kids in 1949, but lost money. Scrabble‍ ’​s big break came in 1952 when Jack Straus, president of Macy’s, played the game on vacation. When he got home he was shocked and appalled to find that his store did not carry this classic board game for adults. He placed a large order of the game Scrabble and within a year everyone had to have one!

How to Win at Scrabble Without Cheating is one of my most popular blog posts about this board game. Finding the right gifts for gamers involves helping them learn the skill – and the history – of the game.

Classic Board Games for Adults

The following games have withstood the test of time for decades, which makes them perfect gifts for gamers. 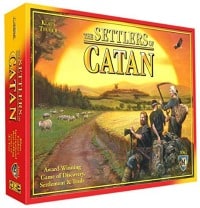 The Settlers of Catan (now now simply called Catan) is a multiplayer board game designed by Klaus Teuber and first published in 1995 in Germany by Franckh-Kosmos Verlag as Die Siedler von Catan. In this classic board game for adults, players assume the roles of settlers, each attempting to build and develop holdings while trading and acquiring resources. Players are rewarded points as their settlements grow; the first to reach a set number of points is the winner.

Of all the classic board games on this list, Catan is the youngest. I had to include it as it was mentioned more than any of the other board games in my informal Facebook and Twitter survey! I thought I’d put it high up on this list of gifts for gamers, as it was definitely the most popular of all the board games mentioned.

Dominoes – A Classic Board Game for Adults

The earliest mention of this – the most classic of board games for adults – is from Song Dynasty China. Dominoes first appeared in Italy during the 18th century, and although it is unknown how Chinese Dominoes developed into the modern game, it is speculated that Italian missionaries in China may have brought the game to Europe. European-style dominoes are traditionally made of bone such as ivory, or a dark hardwood such as ebony, with contrasting black or white pips. Other Domino sets have been made from many different natural materials: stone (e.g., marble, granite or soapstone); other hardwoods (e.g., ash, oak, redwood and cedar); metals (e.g., brass or pewter); ceramic clay, or even frosted glass or crystal.

If you’re looking for gifts for gamers because a woman’s birthday is coming up, read  40th Birthday Gift Ideas for Women – From Easy to Extravagant.

Chess – A Classic Gift for Gamers 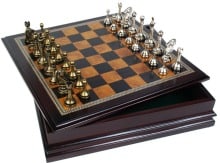 Chess – A Classic Board Game for Adults

This Metal Chess Set With Deluxe Wood Board and Box is one of the most classic board games for adults not because the gorgeous wood box doubles as a storage case, but because the origins of chess go back to 280 – 550 CE in Eastern India.

Writings about the theory of how to play chess began to appear in the 15th century. The first modern chess tournament was organized by Howard Staunton, a leading English chess player, and was held in London in 1851. Chess has a long and fascinating history – and if you think this board game is the perfect gift for someone you know, you might also give them A History of Chess: The Original 1913 Edition 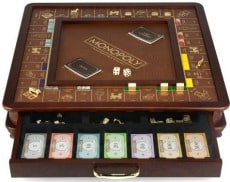 Monopoly – A Classic Board Game for Adults

is one of the most elegant classic board games for adults – again, making it a perfect gift – because it includes a two-tone wooden cabinet with burled wood veneers. The die-cast houses and hotels are plated, and there is a recessed faux-leather rolling area. Two integrated storage drawers are perfect for storing money, and there is a gold foil-stamped game path.

Monopoly is a board game for adults and children that originated in the United States in 1903 as a way to demonstrate the evils of land ownership. The current version was published by Parker Brothers in 1935. Subtitled “The Fast-Dealing Property Trading Game”, the game is named after the economic concept of monopoly—the domination of a market by a single entity. It is now produced by the United States game and toy company Hasbro, and is without a doubt one of the most classic of board games for adults.

Checkers – one of the most classic board games for adults 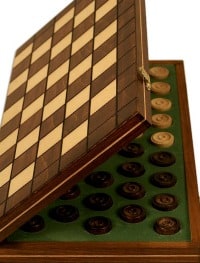 Draughts or Checkers – A Board Game for Adults

Checkers or Draughts may seem like one of the most simple board games for families, but its origins go back for centuries.

A similar game has been played for thousands of years – a board resembling a draughts board was found in Ur dating from 3000 BC.In the British Museum are specimens of ancient Egyptian checkerboards, found with their pieces in burial chambers, and the game was played by Queen Hatasu. Plato mentioned a game as being of Egyptian origin, and Homer also mentions it. Draught or the game of checkers was said to have been played during the Trojan War. The Romans played a derivation, called the game of the Little Soldiers. This gift for gamers could include a history that extends to the beginning of time! 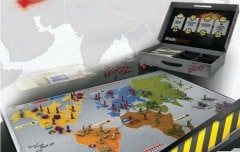 Risk – A Classic Board Game

Risk Legacy is the first board game where choices and actions made in one game carry over into the next, so no two games are alike. Locked off components can be revealed as players win multiple games; winning players get to name a continent or found a major city. If you’re giving this board game as a gift, then you may want to set aside quite a bit of time to play!

Risk is a strategy board game produced by Parker Brothers (now a division of Hasbro). Winning Moves also makes a classic 1959 version. Risk is a classic board game for adults that was invented by French film director Albert Lamorisse, and originally released in 1957 as La Conquête du Monde (“The Conquest of the World”) in France. It was later bought by Parker Brothers and released in 1959 with some modifications to the rules. Risk: The Continental Game has now become Risk: The Game of Global Domination.

Risk is one of the best board games for patients who are recovering from health ordeals. Read  10 Gifts for People Recovering From Back Surgery for more ideas, especially if you need a gift for a gamer who has recently been laid up in a hospital bed. 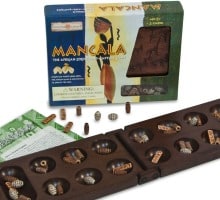 Mancala – Classic Board Games for Adults

should really be at the top of this list of classic board games for adults! It’s a derivative of what was probably the first game ever played by mankind, womankind, and children all over the world. If you haven’t played Mancala, then you need to give it to someone as a gift and break it in as soon as the wrapping paper has been tossed aside.

Mancala is a family of board games played around the world, sometimes called “sowing” games, or “count-and-capture” games, which describes the gameplay. The word mancala comes from the Arabic word naqala, which means “to move.” No one game exists with the name mancala; the name is a classification or type of game. This word is used in Syria, Lebanon, and Egypt, but is not consistently applied to any one game. More than 800 names of traditional mancala games are known, and almost 200 invented games have been described. However, some names denote the same game, while some names are used for more than one game.

In 10 Fun Games for Couples, I describe how you can make a homemade mancala game. This is a great gift idea for gamers who are creative and imaginative. 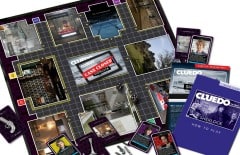 Cluedo – A New Board Game for Adults

Cluedo – Sherlock Edition is one of Britain’s classic board games for adults – known as Clue in North America. In this enigmatic series, Sherlock Holmes and Dr Watson’s adventures in 21st century London are the focus of their own version of the classic game of Cluedo! Was it Moriarty with the gun on the roof of St Barts?

Cluedo or Clue is a murder mystery game created by Anthony E. Pratt from Birmingham, England. This board game for adults is currently published by the United States game and toy company Hasbro. The object of the game is to determine who murdered the game’s victim (“Dr. Black” in the UK version and “Mr. Boddy” in North American versions), where the crime took place, and which weapon was used. Each player assumes the role of one of the six suspects, and attempts to deduce the correct answer by strategically moving around a game board representing the rooms of a mansion. The goal of this classic board game for adults is to collect clues about the circumstances of the murder from the other players. 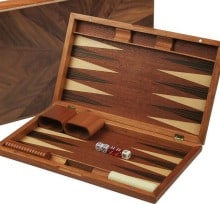 Backgammon- Classic Board Games for Adults

Since I kicked off this list of classic board games for adults with the relative new arrivals, I’ll end with one of the oldest board games in the world: Backgammon. The game pictured includes a portable board, two sets of 15 checkers, four dice, and a doubling cube.

Backgammon is one of the oldest, most classic board games for two adult players. The playing pieces are moved according to the roll of dice, and a player wins by removing all of their pieces from the board before their opponent. Backgammon is a member of the “tables family”, one of the oldest classes of board games in the world. This makes it an especially perfect gift for gamers.

Backgammon involves a combination of strategy and luck (from rolling dice). While the dice may determine the outcome of a single game, over a series of many games, the better player will accumulate the better record. Thus, records of matches between players are good indicators of relative skill. Like chess, backgammon has been studied with great interest by computer scientists. Owing to this research, backgammon software has been developed that is capable of beating world-class human players.

Another potentially good source of gifts for gamers is  12 Gifts for Artists – Inspired by Picasso.

I welcome your thoughts on these classic board games for adults, and hope you find the perfect gifts for gamers on your list!

How Much to Pay a Dog Walker 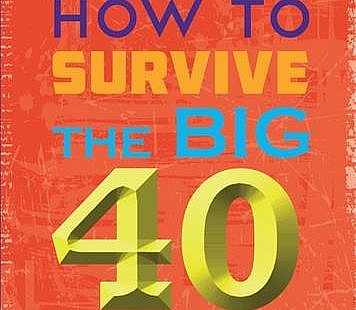 How to Survive Turning 40 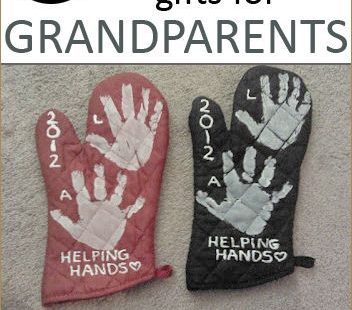 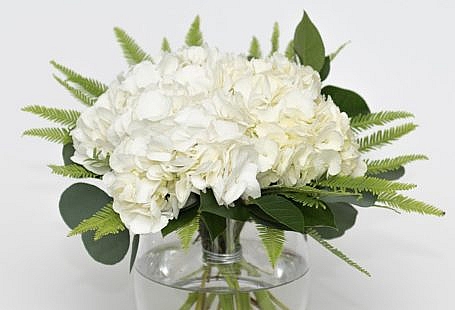