Sleep-related eating disorder is a type of sleepwalking; people who are in partial arousal from deep sleep get out of bed and consume unhealthy food. These aren’t foods they would normally eat during the day – and they’re definitely not foods that help people sleep! When people eat while sleeping, they’re more likely to consume potato chips, cookie dough, or other high-calorie foods. Sleep eaters are becoming more common, and sleep-related eating disorders are receiving more attention by psychologists and sleep experts.

What is Sleep Eating Disorder?

Sleep-related eating disorders are different from “nocturnal eating syndrome” in one significant way: nocturnal eating syndrome involves full recall the following day of eating in the night. Sleep eaters, on the other hand, don’t necessarily remember eating in the night. They find evidence on their pillow, face, bed, and kitchen. Some sleep eaters even cook full meals in the middle of the night.

“It’s the most frustrating, defeating feeling to know that you’ve done it again,” says Donna, a sleep eater  in Sleep: A Groundbreaking Guide to the Mysteries, the Problems, and the Solutions by Dr Carlos Schenck. “It’s almost like an addiction…I’d wake up with piles of wrappers in bed; chocolate melted on my face, on my sheets and pillowcases, in the pockets of my robe; peanuts in my mouth…it’s a horrible feeling to way up and know you couldn’t stop yourself.”

Sleep eaters usually display most of these characteristics:

Some sleep eaters may be aware they’re eating in the middle of the night but they can’t stop themselves. Sleep eaters don’t binge because they’re hungry; some sleep eaters are driven to eat strange combinations of food, such as salt or sugar sandwiches, raw meat and mayonnaise.

Who is prone to eat while sleeping?

The people most at risk for sleep-related eating disorder are those who have:

Some prescription medications have been connected to sleep eating, such as the mood stabilizer lithium and the benzodiazepine receptor agonist zolpidem (Ambien).  Other sleep disorders – insomnia, sleep apnea, narcolepsy – have been strongly associated with sleep-related eating.

The symptoms and consequences of this sleep disorder range from weight gain to injuries from carelessness while preparing food. 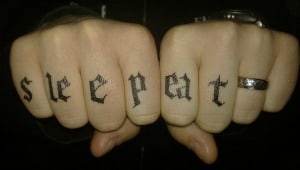 Almost half of Dr. Schenck’s sleep-eaters are obese because they tend to eat foods like brownies, cakes, and ice cream. Since they’re eating while sleeping, they’re not counting calories. Even when they diet and exercise to lose weight, sleep eaters struggle to take the pounds off. Their sleep eating habits counteract the effects of diet and exercise while they’re awake.

Feelings of shame and embarrassment

Living with roommates, partners, and even family members is awkward for sleep eaters, especially when they wake up with chocolate all over their face and pillow! Frozen foods, such as pizza, may have bites taken out of it. Packaged food goes missing, or is partially eaten. The feeling of loss of control after a sleep eating episode can induce feelings of shame or guilt in sleep eaters.

Sleep eaters don’t think about their food allergies or other nutritional concerns when they’re eating in the middle of the night.

Sleep eaters could fall down the stairs, choke on food, or burn or cut themselves while cooking.

Tooth decay and damage can occur during a sleep eating episode. Some prescription medications require certain foods be eliminated from the diet – which a sleep-eater won’t consider during an episode. When they’re eating while sleeping, they’re not thinking about their medications or health.

Because of the interrupted sleep, sleep eaters may not feel refreshed or lively in the morning. Eating while sleeping disrupts sleep, even though people don’t actually wake up. If you’re a sleep eater, you might find Foods That Stabilize Emotions and Give You Energy helpful.

If you struggle with sleep eating but you think it’s more of an eating disorder than a sleep disorder, read Life Without Ed: How One Woman Declared Independence from Her Eating Disorder and How You Can Too by Jenni Schaefer and Thom Rutledge.

According to Dr. Schenck, biofeedback, acupuncture, self-hypnosis, hypnotherapy, and psychotherapy did not have any benefits in the cases he’s studied. Sleep eaters don’t tend to respond to those types of treatments for sleep disorders.

Some sleep-eaters tried locking their fridges, but they sustained injuries from breaking the locks when they were in the midst of an “eating while sleeping” episode. Other sleep-eaters put notes on their fridges, such as, “Don’t eat, you pig!” in an effort to jolt them out of eating while sleeping. Still other sleep-eaters asked family members to stop them, or punish themselves the next day by doing extra chores or undesirable tasks. These aren’t usually effective treatments for sleep-related eating disorders.

Motion sensors to wake sleep eaters up – or alert others

One of the most common treatments for sleep-related eating disorders are prescription medications. But, since this sleep disorder is related to sleepwalking, I’d try a before prescription medication. If you’re a sleep eater and aren’t ready to take drugs to control it – not that there’s anything wrong with medicine that helps you sleep! – you might consider a motion detector.

A Motion Sensor And Pager

removes the alarm from your bedside, so you won’t be jolted out of a deep sleep. This might be a good option for parents or caregivers who live with sleep eaters, because it will alert them when the sleep eater gets out of bed.

“Sleep eaters often have a history of sleepwalking, so this phenomenon is considered more of a sleep disorder than an eating disorder,” writes Dr Lawrence Epstein in A Good Night’s Sleep. “Eliminating sleepwalking will stop the trips to the refrigerator. Treatment with medication is often effective. Dopamine agents, anticonvulsants, antidepressants, and opiates are among the drugs prescribed.”

The best treatment for this sleep disorder, according to Dr. Schenck, is Topamax or topiramate. It’s an anticonvulsive medication; this sleep doctor reported a success rate of about 66% for sleep eaters after six months. His sleep eaters reported more restful sleeps and weight loss, and less eating while sleeping. A possible side effect of this prescription medication is a tingling sensation (paresthesias). Since this drug controls the eating but disrupts sleep, Dr. Schenck also prescribes mild doses of sleeping aids, such as clonazepam or trazodone.

Every time I mention prescription sleeping pills here on the Sleep Blog, I have to share 8 Things You Need to Know About Sleeping Pills! Even when a doctor prescribes them, sleeping pills need to be taken with caution.

To learn more about this sleep disorder, read Dr Schenck’s Sleep: A Groundbreaking Guide to the Mysteries, the Problems, and the Solutions. It’s a great resource for sleep sleep-related eating disorders, insomnia, restless leg syndrome, and other sleep disorders.

Do you have any questions, thoughts, comments about sleep eating?

I welcome your big and little thoughts below! I’m not an expert on sleep-disordered eating so I may not be able to answer the hard questions, but I’m good at research

I might be able to help you find solutions or more information on this or other sleep disorders.

If you struggle with sleep eating, I hope you found enough information here to help you start thinking about ways to overcome this sleep or eating disorder.  The first step might be reading more about sleep and/or eating disorders, or perhaps trying the motion-activated alarm to wake you up before you eat. The next step might be talking to a sleep doctor or psychologist. Take it one step at a time, and you will find peace.

Resources: A Good Night’s Sleep by Lawrence J. Epstein, M.D. and Sleep: A Groundbreaking Guide to the Mysteries, the Problems, and the Solutions by Carlos H. Schenck, M.D..

Animal Ministry Career – What Does a Pet Loss Chaplain Do?