One Thing You Can Do to Stop Dog Abuse

You can’t save all abused animals, but you can do one or two little things to help stop dog abuse. Little things make a big difference – especially to the dog who is being abused!

My practicum placement is at the Union Gospel Mission on the Downtown Eastside of Vancouver. Part of my role in the shelter is to invite women in for a hot lunch. Yesterday, as they were coming in, one of the women told me that she just saw a man carrying a black garbage bag with a dog inside. The dog was barking and trying to get out.

This was the first time I have been faced with dog abuse, and I didn’t know what to do. It was my first day in the Women’s Centre at Union Gospel Mission – my first time at the door, welcoming guests for lunch – and I didn’t know if it was “appropriate” for me to go running down the street looking for a man with a dog in a black garbage bag. After all, my job is to help feed the hungry and homeless, not stop dog abuse. So I stayed put…and later I cried all the way home.

The woman who told me about the dog abuse also told two other shelter workers. She was very upset, and she wanted us to do something about it. If I could do it over, I would leave the shelter and look for the man. There was another shelter worker at the door, and we don’t need two. I regret not doing the one thing I could have to help this abused dog: take a walk around the block, and see if I could rescue him.

One Thing You Can Do to Stop Dog Abuse

When I talked to one of the shelter workers about how bad I felt about hearing about dog abuse and doing nothing, she said tried. She went to the end of the street to find the man. She didn’t see him; it was too late. She reminded me that many people on the Downtown Eastside of Vancouver struggle with mental illness, and it may be unwise or even dangerous to approach a man who puts dogs in black plastic garbage bags.

She asked me how I’d approach him. I would’ve said, “Hey – I love dogs! I have two dogs at home, called Tiffy and Georgie. Can I see your dog?” Then, when he took the dog out of the bag, I would’ve grabbed the dog and run as fast as I could! I would’ve taken that dog home, and added him to my pack.

Maybe the ending wouldn’t have happened that exact way…but I could’ve taken it one step at a time. I could’ve at least tried to find the man who was abusing the dog. I wish I would’ve done that, at the very least.

How to Help an Abused Dog

Carefully assess the situation. Is it safe to approach the person abusing the dog – and are you a friendly, nonthreatening person? I’ve been told my demeanor and smile makes me easy to approach. I have no problem talking to people on the Downtown Eastside of Vancouver, and I believe I could’ve approached the man who had the dog without a problem.

Call a local animal shelter. I didn’t call the Vancouver SPCA about this incident of dog abuse, because I don’t believe they have the resources to send people out looking for this man. If you know of dog abuse that is happening regularly at someone’s house or business, please call an animal shelter. That is one thing you can do about dog abuse. 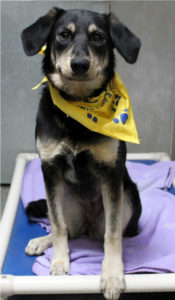 1. Support the SPCA or dog shelter. If you can’t rescue that specific dog, donate money to the SPCA or a humane society that rescues abused dogs. Do it in the name, spirit, and soul of the abused dog. Also, support blogs, websites, and Facebook pages of people who are actively trying to stop dog abuse.

2. Volunteer to foster a dog. The Vancouver SPCA has tons of volunteers – I heard there’s even a waitlist of people who want to volunteer at the SPCA! I think this depends on the location of the SPCA, though. Check with your local SPCA to see what their volunteer needs are. And, remember that there are other ways to help abused dogs. Volunteering to foster dogs is one way to fight dog abuse – but it’s not a little thing. I haven’t fostered dogs (yet), because we have two dogs already.

If you already have a dog and you aren’t sure about fostering, read Should You Adopt a Second Dog?

What is your experience with dog abuse, or other forms of animal cruelty? I welcome your thoughts below…

Lighten Up to Get More Done – Dr Estelle Ramey